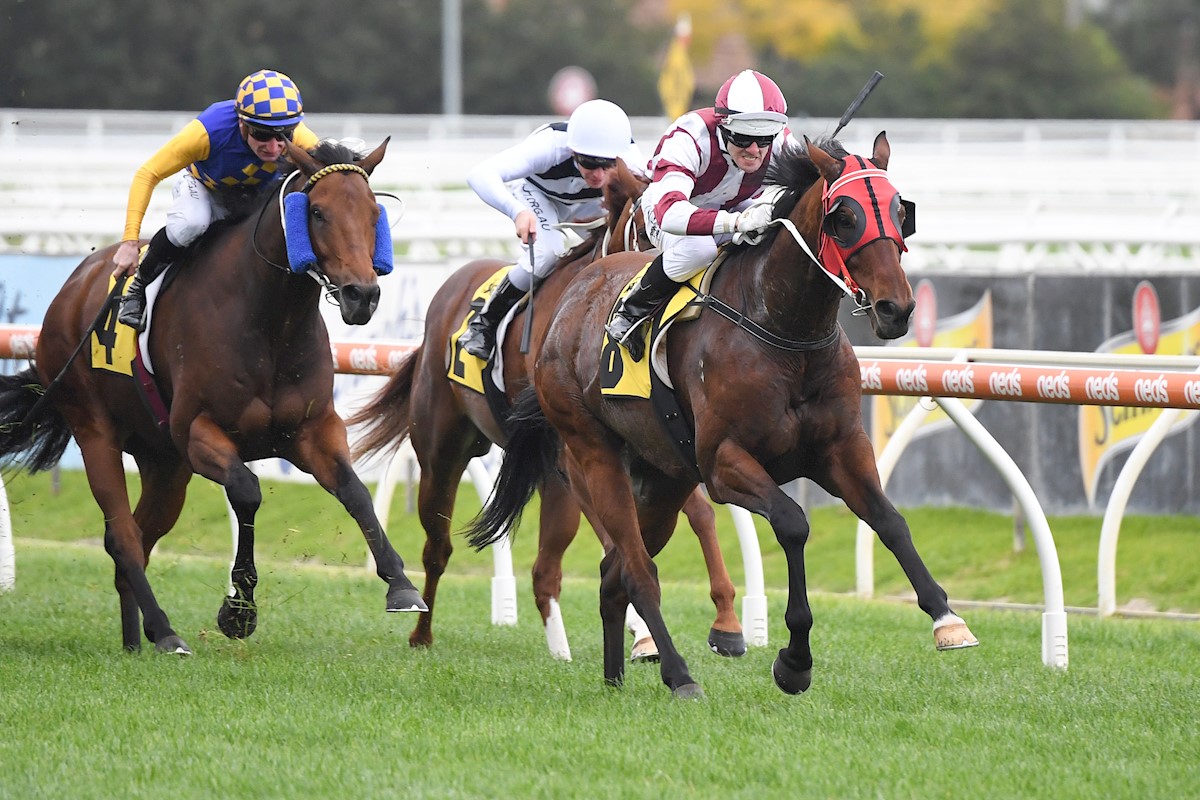 John Pascoe knew straight away that there was something he really liked about a filly that was about to go under the hammer at the March Inglis Thoroughbred Sale in 2007.

He admits he first spotted Cranbourne trainer Greg Eurell casting his eye over the filly which was by the rarely used Japanese stallion Yasey.

Pascoe, a former jockey who has been a hobby trainer at Moe since taking out his licence in 2003, parted with $6000 for the filly which was out of Occasionally Yours (The Challenge) which had won three races at the picnics.

But her biggest claim to fame came last Saturday at Caulfield when the chestnut mare’s five-year-old son, Vainstream by Bel Esprit caused something of an upset in the VOBIS Gold Sprint (1200m) with a one length victory in the affluent race.

Pascoe and his co-owners walked away with a cheque to take Vainstream’s earnings to $346,200.

While some saw it as an upset with the favourite Pippie finishing a disappointing sixth, it’s certainly not the way Pascoe summed it up. Just two starts earlier, Vainstream finished fifth but fewer than two lengths from Group 1 Oakleigh Plate winner, Pippie. He started at the whopping odds of 200-1 that day.

Then at his next start in the Listed Hareeba Stakes at Mornington last month, he finished less than a length from the winne, Diamond Effort.

Pascoe said his horse had been running some great races recently and he wasn’t surprised with the victory and his $12 starting price.

“It was a great win. He has been running some honest races and deserved to win,” Pascoe remarked.

“I weighed him up with the favourite (Pippie) who ran nearly a record race on a good three to beat him in the Oakleigh Plate (1100m) and this was 100m further on a soft five.”

Noel Callow won the first two races on Vainstream and his third and last ride on the gelding before last Saturday was when he finished third in the 2018 VOBIS Gold Dash when it was run over 1100m.  Saturday’s victory was the first time Callow had ridden the gelding since September 2018.

“He has been riding in other areas and he is a top rider but it’s just matter of pinning him down to book the rides.” Pascoe said.

Pascoe was always confident that Yasey San would produce a decent horse after having a good race record which included seven wins in her 48 race career which also featured nine placings. She raced up to 2100m but was unplaced over the long trip.

Pascoe said Yasey San’s first foal, Yasey Sun, was also by Bel Esprit and was shaping up to be reasonable horse but had wind issues. After initially starting under the care of Pascoe he has had won four wins to his name but is now under the care of fellow Moe trainer, Russell Cluning.

“Following his operation, he should be still be able to win races around the 58 rating I expect.” he said.

Pascoe also has a filly out of Yasey San, by Ready For Victory, which will be sent to the breakers next week.

“Prior to her, they were all colts, so we will have something to go on with her,” he said.

Yasey San is now in foal to another Sun Stud stallion, Palentino.

When Pascoe bought Yasey San at the 2007 sale, she was one of only two horses in the catalogue sired by Yasey. The other a colt, was sold for $1250 and went onto win two country races as Bigbadbongoman.

Pascoe went to the sales when he saw Greg Eurell looking at a horse.

“I was looking at another horse and Greg was looking at this filly, Yasey San. While she was very slim she was also very athletic looking,” Pascoe said.

“I went and had another look at her and decided I was going to buy her as she looked an athletic type.

“And that’s where it started.”

Yasey is by Sunday Silence (USA) and Pascoe said he was happy with the bloodlines.

The Japanese stallion served only 56 mares which produced 43 foals when he stood in Australia from 2004 to 2007. The stallion was exported to China in 2009.

Pascoe also has a gelding and a colt by Magnus out of Yasey San. The gelding hasn’t shown much from his two starts, but Pascoe is confident of the ability of the unnamed two year-old Magnus colt.

Pascoe said he didn’t have any hesitation in sending Yasey San to Sun Stud’s Bel Esprit who he described as a red-hot horse at the time.

“He was getting an array of winners and had won a Blue Diamond whilst still holding a reasonable service fee. he said.

“It’s like the first one out of the mare by Magnus wasn’t much chop, but the second one by Magnus is showing real potential. I don’t how the system works, like one is a chestnut and one is a bay and they have the same sire.

Although Pascoe hasn’t tried Vainstream beyond 1200m, he is confident he could be extended out to 1400m and 1600m.

Pascoe said he trains and races what he breeds and is supported by a loyal group of owners.

“If you get the bloodline right and it all starts happening, you just stick with it,” Pascoe said.

“I think you are bound to get a good horse.”

Pascoe has been involved with horses since he was 15 and rode in the 1960s with some success in city tracks.

“I used to ride track work at Moe for Jimmy Morgan and spent some time in Melbourne before I got too heavy.  I’ve always been involved in the industry’’ he said.

Yasey San was Pascoe’s first winner as a trainer and he admits she continues to fuel his passion for racing through Vainstream and the hope that she’ll produce another good one.