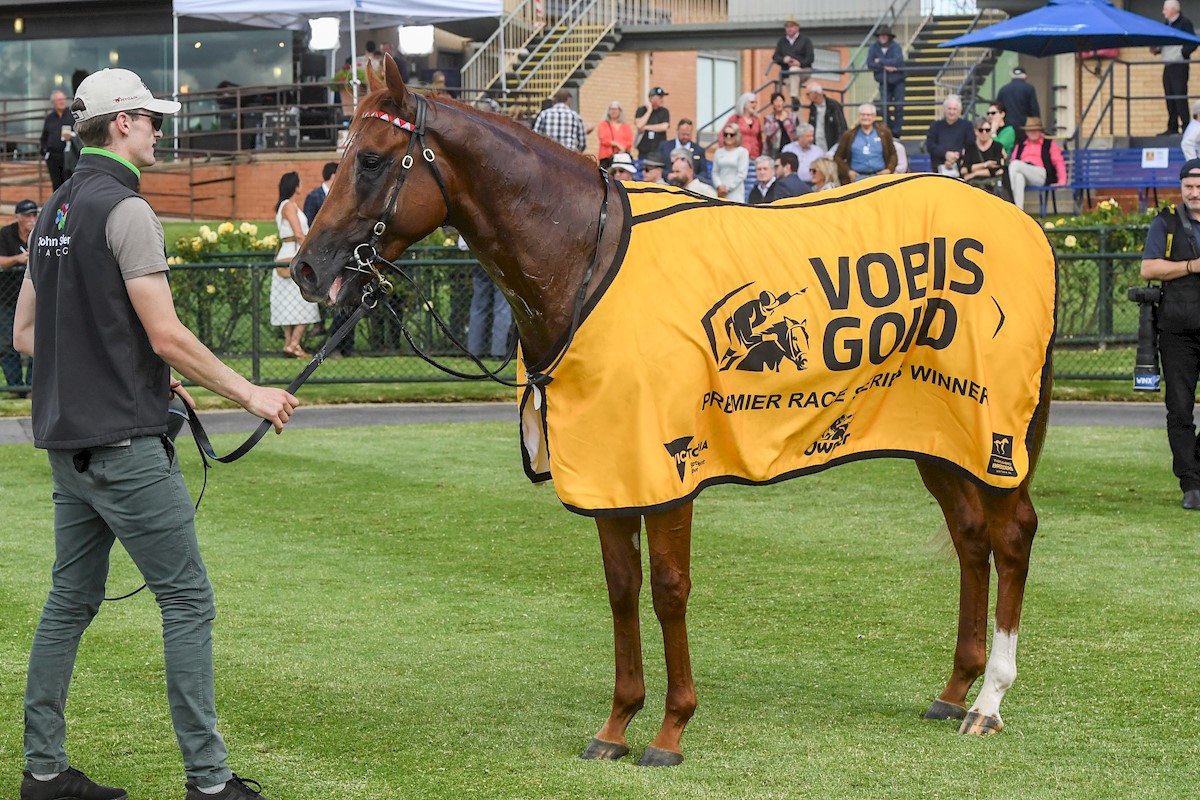 Exciting two-year-old Starry Legend was headed to the paddock after remaining unbeaten from his two starts with another exciting victory in the VOBIS Gold Rush (1000m) at Bendigo on Saturday.

But after realising that the Victorian bred colt is eligible for the $1 million The Showdown (1200m) at Caulfield on April 17, Caulfield trainer John Sadler said Starry Legend’s spell in the paddock will now be a short one.

Starry Legend, a $500,000 purchase by Sadler for Hong Kong based Boniface Ho at last year’s Gold Coast Yearling Sale, has shown in his two starts he is something special.

The colt was sired by Zoustar when he stood at Victoria’s Woodside Park Stud at Tylden. The Showdown is exclusive to the two-year-old progeny of VOBIS Sires-nominated stallions and offers a first prize of $500,000.

Woodside Park’s Will Rowsthorn said it was pleasing that the colt had been sired by Zoustar when he stood at the stud. The colt’s dam is Savsenga (Reset x Westphalia).

Going into Saturday’s race after his first win at Sandown, also over 1000m in February when he cruised to a 3.8 length victory, Sadler was confident of the colt remaining unbeaten but said it would give a good indication of how good he is – and he wasn’t disappointed.

“He is a really nice horse,” he said.

“We were actually going to tip him out, and he has gone out for a few days just to have a freshen-up, but we didn’t realise he was eligible for The Showdown.

“We are going to run him in that before he goes out to have a reasonable break.”

Sadler said The Showdown would be a really good race for Starry Legend but believes the 1200m of the race at this stage of the horse’s career is a slight query.

“And I would have sort have looked at the horse and thought he’d had enough for the time being, but we have got three weeks to get him ready for it,” he said.

“A week of that three weeks he can just go out in the paddock during the day. Hopefully we can get him through.”

Sadler said that when he looks back at the sale, the colt at half a million dollars wasn’t one of the most expensive yearlings sold.

“He was nowhere near it,” he said.

“I remember when we bought him for a half a million that there was no big deal or song or dance about him as he was just another one of the middle range horses sold.

“They go for big money and they are even dearer now. It’s crazy at the moment and there are a lot of wealthy people, I think, who have got a lot of money to spend.”

Sadler said he specifically bought the colt for Ho after selecting and recommending that he be bought.

He said he liked the colt on type.

“He was a beautiful package and he hasn’t changed and is a very nice horse,” Sadler said.

“Not a big horse, but a very neat horse.

Starry Legend hasn’t been without his dramas and required surgery for colic while recovering from a leg injury before he raced.

And with his owner Ho holding a slot in the The Everest – the race he won last year with Classique Legend which is now racing in Hong Kong – the $15 million race is also an option for Starry Legend if he continues to develop.

And with Sadler having several horses for Ho, he is aware that they could be plucked from his stables and despatched to Hong Kong.

And he believes if Starry Legend is a Group 3 horse he could be shipped off to Hong Kong, but if he up to Group 1 level, he could stick around in Australia to contest The Everest or the Group 1 Coolmore Stud Stakes (1200m).

And jockey Michael Dee is also confident of bigger things in store for Starry Legend but admitted he didn’t know how the colt would finish the race after quickly claiming the lead so early and quickly.

“He’s learnt a lot from his first start but today, he just wanted to overdo it early and for how quick he goes early, he does an amazing job to keep running that strong to the line,” Dee said.

“He’s a very smart horse and on the way up. Hopefully, he can learn to relax a bit better than he showed then but he’s certainly on the way up for sure.

“What he’s showing now is pretty much raw ability and every time he steps out in track work and gallops, he’s still learning.

“There’s still plenty of upside in him.”

“He probably does it a bit too effortlessly early which causes him to cruise at the top of the straight and that made him look weakened up at the finish.

“But when he harnesses his energy he’s going to be a very good horse.”

Just how good, is the question.