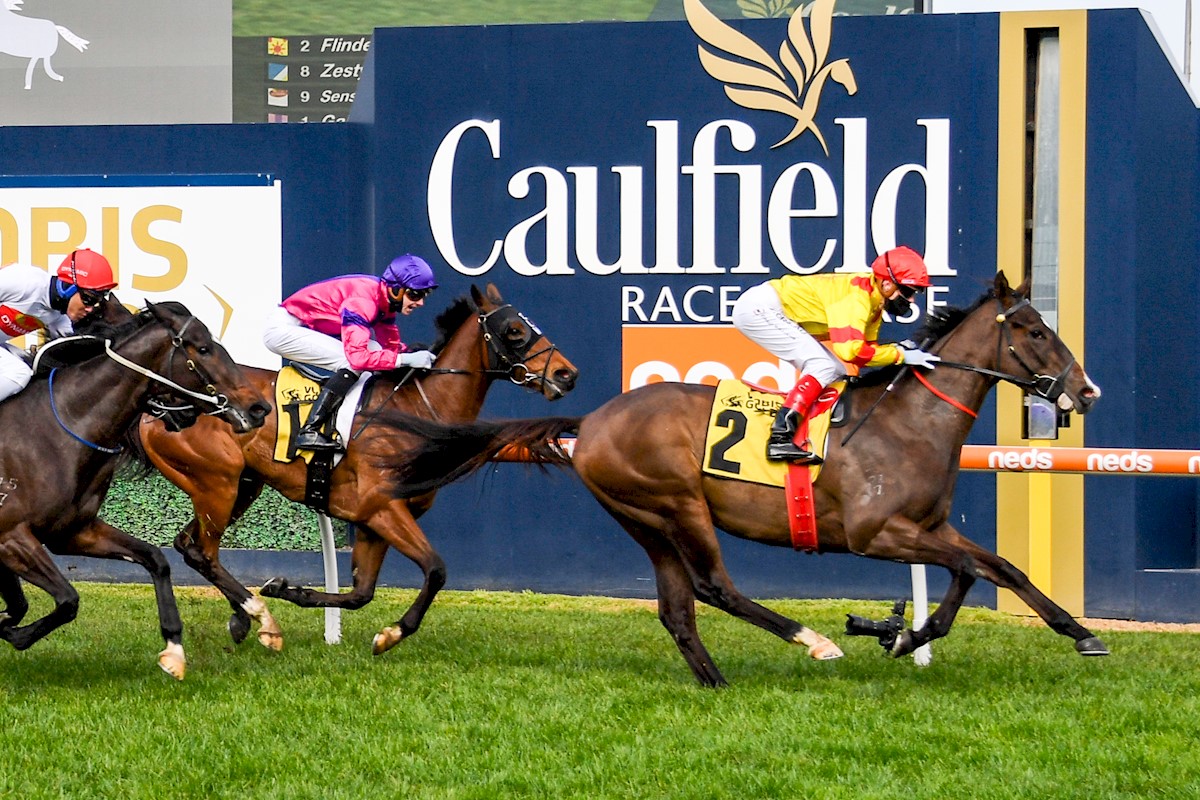 On Saturday the 25th of July 2020, it was Sun Stud who made headlines with their sires winning the VOBIS Gold Ingot and the VOBIS Gold Stayers at Melbourne Racing Club.

The VOBIS Sires program was launched in 2015 as an addition to the VOBIS incentive scheme. The scheme was designed to reward the breeder, owner, trainer and jockey of eligible racehorses. It is considered a world-leading incentive scheme for those who invest and race Victorian bred thoroughbreds.

There are over 800 VOBIS races in the Victorian racing calendar providing participants with lucrative opportunities to gain their share in the VOBIS bonuses.

It was the late Fighting Sun who saluted the VOBIS Gold Ingot on Saturday as Flinders River gave an impressive performance to win the $145,500 race for Ciaron Maher and David Eustace. The training duo took out the quinella in the race as Galactic Fury, followed closely behind his stable companion. David Eustace commented that the VOBIS race ‘has been the plan for him all preparation and it is great when it comes off. It is great to see these races in the calendar.’

The Maher and Eustace team have had much success with Fighting Sun and the qualities of the sire appear to be present in the progeny. ‘We have always found the Fighting Sun’s pretty straight forward horses to train, very honest and sound. We felt we would be able to have him spot on for the race.’

The VOBIS races bring a high calibre of competition and as a homebred for Sun Stud, it was a fantastic result for the industry.

“You are always trying to maximise return for your owners and the VOBIS scheme makes for good competition which can at times make the races a little bit tougher. The VOBIS Gold only races support the breeders and gives a good return for owners as well. We are always looking to try and target those races as it is a great initiative,” Eustace remarked.

For the VOBIS Gold Stayers race worth $145,500 it was Magnus who rose to Victory, as Mahamedeis (Magnus x Elusive Magic) was crowned in the winners circle. This is the second VOBIS Gold race that the horse has won with nine wins from thirty-six starts. A potential career over the jumps may well be put on hold while the riches of the Spring looms with possible starts in the Herbert Power or the Bendigo Cup.

“The race on Saturday was always in mind as Mahamedeis is VOBIS qualified. We do tend to target those races with our VOBIS Gold horses as much as we can. The prize money and the bonuses are fantastic, and it is a really great incentive. We are trying to reap the most we can for our owners so the VOBIS races are great for that,” remarked Nick Ryan.

Although Nick has trained many of Magnus’ progeny before, this horse is the first he has purchased and with over $800,000 in prizemoney it was a very good decision.

“With purchasing my yearlings, I start with the physical aspects of the horses and then go to the book. He is the only Magnus I have ever purchased and was in the first crop I ever brought. I am very, very lucky as he is such a quality horse,” Nick commented.

Mahamedeis is nominated to run on Saturday and the option of the hurdles is still a possibility as Nick is looking at some potential trials at Caulfield.

“The plan wasn’t always to go jumping, it was used as a bit of a tool to keep him interested and focused, but he really enjoys it. If he continues the way he is going as happy and fit horse anything could happen.”

Hoofnote: Super VOBIS for 2018-born foals closes on the 31st of July 2020 and you can nominate your yearling by clicking here.