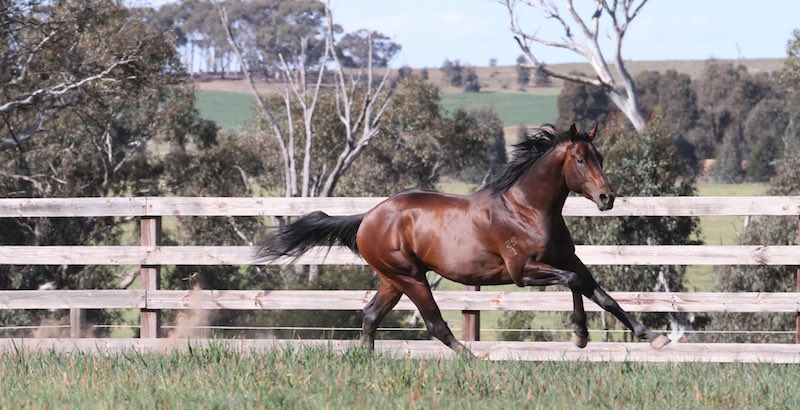 Twelve months ago, Three Bridges Thoroughbreds, and the Victorian breeding industry as a whole, lost a promising young stallion in Unencumbered. The son of Victorian sire Testa Rossa died from post-surgical complications after surgery for chondritis, a progressive inflammatory condition of the throat.

Prior to his death, breeders had been supportive of the 2014 Magic Millions 2YO Classic winner, with the sire covering over 500 mares in his first four seasons at stud. Three Bridges Proprietor Peter Liston, said at the time that while it was sad for all at their Eddington farm, there was optimism his progeny could do the farm proud in the seasons to come.

With 48 wins from 33 individual winners just this season, this optimism is coming to fruition as his progeny really start to leave their mark on tracks around the country. Unencumbered currently sits in fifth place on the Second Season Sires List, with nearly $1.5 million in prizemoney, and eleventh on the Two Year Old Sires List.

After two wins and a third in the Group 1 Blue Diamond Stakes, Free of Debt heads towards the Golden Slipper. Revolution has won 4 races in Singapore, whilst Jumbo Ozaki has won two from two for trainer Phillip Stokes. Queensland’s Courseshewill has won two of her five starts and currently holds sixth position on the ballot order for next month’s $1 million The Showdown, whilst Matthew Seyer’s Felicia sits in ninth after two impressive wins in Adelaide.

With a total of four Unencumbered 2-year-olds currently sitting in the Top 25 of the ballot order for next month’s The Showdown, connections will be hoping they replicate their sire’s success on the racetrack and further cement his memory in the record books.

Unencumbered was out of Listed winner Blizzardly (More Than Ready) and is a direct descendant of outstanding UK race mare Crystal Palace. Herself a two-time Group 1 winner, Crystal Palace produced three stakes winners at stud including six-time Gr1-winning stallion Royal Palace, winner of the 2,000 Guineas, English Derby and the King George VI & Queen Elizabeth Stakes, amongst others.

His breeding lines and his strong win in the Magic Millions, a race that has become a sire-making race over the years, was enough to convince Peter Liston to secure Unencumbered for the Three Bridges stallion roster.

“He really enjoyed his job,” said Peter. “His nature was very relaxed. He would swagger down to the covering barn, cover the mare in a couple of minutes, then swagger back, telling the rest of the farm how good he is on the way back, like some of them might be lucky if they’re next. We couldn’t have been happier with the way he started.”

Also from the Maluka draft, Busuttin Racing secured another of his progeny – a Sweet Maggie colt for $60,000 (lot 479). With strong New Zealand connections, this colt is a half-brother to Group 3 winner Vinnie Eagle, while the second dam produced dual Group 1 winner Nashville (NZ). Super VOBIS and VOBIS Sires eligible, he will be aimed towards The Showdown in 2020.

“This colt is a beast!” said Maluka Thoroughbred’s Luke Anderson. “Great walk and fast in the paddock. We loved developing the colt…he handled it brilliantly.”

Three Bridges have four of the fourteen Unencumbered progeny catalogued for Tuesday’s Magic Millions Adelaide Yearling Sale, whilst another five will be on offer at the Inglis Melbourne Gold Sale at the end of April, including a half-sister to Free of Debt.