With little more than 18 months until the running of the inaugural $1 million VOBIS Sires two-year-old race, a record number of stallions have been nominated to the scheme.

“These record numbers are a further vote of confidence in the future of the Victorian breeding industry,” James O’Brien, President of Thoroughbred Breeders Victoria said.

“These record nominations illustrate the incredible value of the VOBIS Sires program, and the importance of providing lucrative returns to owners and breeders,” Carpenter said.

“I am extremely excited to see the inaugural running of the $1 million VOBIS Sires two-year-old in 2019 and the $500,000 three-year-old in 2020, and believe that the success of these races will pave the platform for further interest in the program beyond 2020.”

A full range of pedigrees, race records and service fees are available across the 59 nominated sires.

The 2018 yearling sales will see the first crop of VOBIS Sire eligible yearlings pass through the auction ring. These are the yearlings born in 2016 from the mares covered in 2015.

“I expect many trainers and syndicators will be hunting for VOBIS Sires eligible yearlings in 2018 knowing they can aim those youngsters at the exclusive, inaugural $1 million VOBIS Sires race,” O’Brien said.

The full list of Victorian stallions nominated for VOBIS Sires in 2017 is below. Full VOBIS Sires information for breeders, buyers, owners and stallion owners can be found at the VOBIS Sires website. 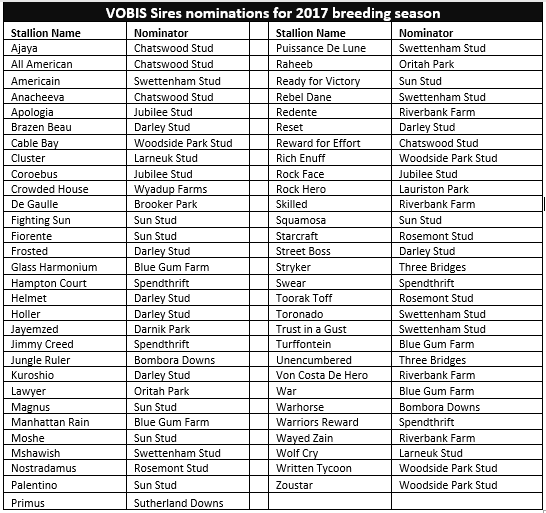