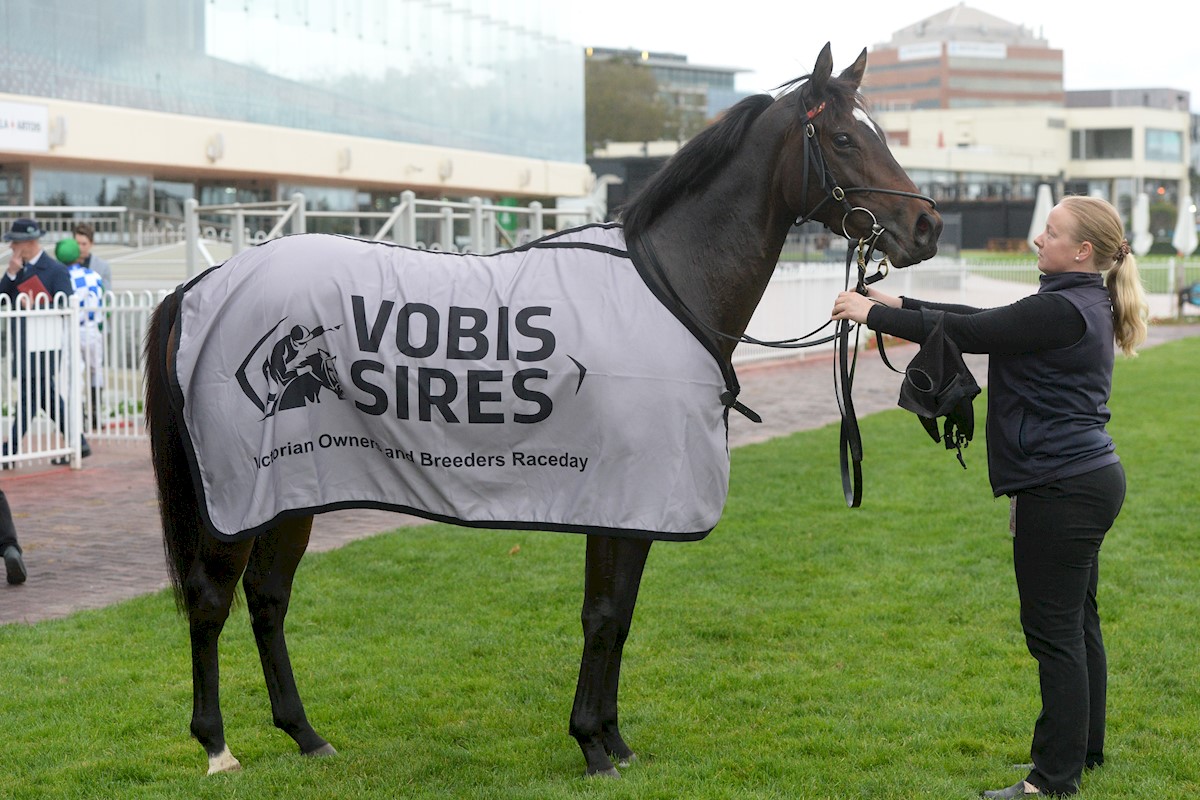 Florent after winning the The VOBIS Sires Guineas at Caulfield Racecourse on April 18, 2020 in Caulfield, Australia. (Ross Holburt/Racing Photos)

Jubilant Mornington trainer Tony Noonan has given a glowing endorsement to the Victorian Owners and Breeders Race Day at Caulfield.

Noonan’s three-year-old filly Florent, won the VOBIS Sires Guineas (1600m) starting at $51 and was ridden by his son Jake.

“You could not highlight it enough for Victorian people, breeders, trainers, owners and jockeys,” remarked Noonan.

“They all get their little snip of the ticket out of it. VOBIS isn’t the sole reason why you buy a horse but it is a good bonus to have with it.”

Noonan pointed out the similarities between the prize money won by the Michael Moroney trained Tofane in the Group 1 All Aged Stakes (1400m) at Randwick on Saturday. Tofane won $280,120 and Florent won $225,000.

“To give Victorian people a chance to race for that sort of money is just outstanding,” Noonan said.

“VOBIS is an outstanding scheme that we are lucky to have and we should be very positive about it.”

Florent showed her strength by winning at Caulfield just three days after racing at Geelong where she finished fifth over 1400m in a benchmark 64 for three year-olds.

Noonan bought the filly, out of Stockpin (Pins), at the March 2018 Gold Coast Magic Millions Sale.

“I was keen about the stallion Fiorente and with help of a mate who is in the horse, Jammie Dillon, he found her in the sale and then we went about doing some homework.

Noonan said the filly was probably in the wrong sale to make big money and she wasn’t big type which would have discouraged some buyers.

“She had a nice pedigree and size doesn’t worry me that much as long as they are strong enough’’ Noonan said.

He said the filly showed enough early ability for him to be confident enough that she would win races.

“She showed her early ability as she was able to race at two when the pedigree wouldn’t have suggested that,” Noonan said.

“She had two runs at the back end of the season and they were just educational type runs and she performed well at both of them.

“She stepped up another grade in her next preparation and has continued to step up this time.”

Noonan admits that during his 35 years as a trainer most of his success has been with horses he has been able to buy.

He said it was always a thrill to have success with horses bought at the right price.

“You usually fill them with people who are passionate about their racing and want to have an a bit of fun,” Noonan said.

“You don’t fill them with gurus because they will tell you that they are too cheap so there must be something wrong with them. It usually makes it a better ride.”

Noonan said it was important to have good owners in a horse and most of those in the ownership of Florent would have been at Mornington in December last year to witness her maiden victory over 1500m after she’d run two seconds.

“They are keen, passionate people about their racing and it’s great to get a result for them,” he said.

“They’re the type of people that in six months when we get the chance to celebrate at a lunch somewhere, those same people’s enthusiasm or excitement won’t have dimmed in that timw. When they get to greet each other and hug each other and watch the replay again, it won’t be any different to what it would have been if they’d been there on the day.”

When Noonan bought Florent at the sales, she was the only horse by Fiorente in the catalogue.

And while Noonan liked Fiorente then, he likes him even more now.

“I have sent a mare to him and I think he is a very good stallion,” Noonan said.

“He probably flies under the radar a bit as hasn’t had the best of mares in his time.  I think you’ll see the best of them when they get to five and probably six. And I think this filly will probably be better when she gets to that age bracket.

“But I think they are a good tough breed.”

Noonan says he’ll probably venture to Adelaide with the filly, but probably won’t target the Oaks (2000m) but a Group 2 for fillies and mares over 1600m on the same day seems more favourable.

“There is a fillies race at Flemington which leads into the Mahogany series so she might have a run at a mile and quarter and that will do her this preparation,” he said.

Jammie Dillon who found Florent describes himself as a “scourer” of sales catalogues. He owns broodmares and has about 10 horses in work with his ownership varying from 100 per cent, 50 per cent,10 per cent and five per cent.

“Tony has been a friend of the family for a long time and I have the majority of horses with him,” Dillon said.

“Because we are very close, he is the professional and I’m the mug who scours the catalogues and I’ll pick them out and he’ll give the yes, no, maybe, let’s have a look or get rid of that, etc, etc

“What happened with this one was that I found her passed in. I loved the breeding, Fiorente out of a Pins mare from New Zealand. The second dam is by Masterclass (USA) and Tony had Show No Emotion (NZ) by the stallion. Show No Emotion won four Group 2 races for him and Masterclass being by The Minstrel (CAN), by Northern Dancer (CAN) so when you dig down into their page there are guineas winners, derby winners and 2000m handicap winners.”

Dillon said he was always looking for staying horses.

And while he and Noonan weren’t at the sales they knew that fellow Mornington trainer Shane Nichols was and they asked him to have a look at the filly and he reported back that there was absolutely nothing wrong with her but she was tiny.

“I purchased her and put her into Tony’s syndication bucket and was sold overnight.

“She had been passed in and I said to Magic Millions that I’d like to buy that horse. They wanted $22,000 and we didn’t bid for her live but purchased her after she’d been passed in.

“Because she had VOBIS we just thought it was worth a punt off the back of her breeding.”

Getting Florent to the races hasn’t come without its dramas.

Dillon, who has been around horses all his life, recalls the day she arrived on the truck from Queensland to his Moorooduc property. When the transport driver led her into the paddock and removed her head collar only for the filly to take off and run through a fence.

Luckily she didn’t hurt herself and two weeks later she ran through another fence when she was being rugged for the first time. Again luckily there was no injury.

“I said to my wife, who is a very good carer of thoroughbreds, you know what, this horse will be a star,” he said.

Dillon said Noonan is the master of conditioning horses and a brilliant trainer who perhaps became a little forgotten amongst the new wave of trainers.