Having originally started his stud career in Victoria, Stryker had initial success in his first 4 crops with a high Winner to runner ratio and stakes-winner producing capacity. Continuing to impact the industry with his progeny throughout the last decade even with a limited number of mares. It is with great excitement that we announce Stryker’s return to Victoria, and in a prime location on farm at Platinum Thoroughbreds Victoria. PTV is located in prime position, just off of the Hume, in an easily accessible position, making Stryker even more inviting to mare owners to consider in 2021.

Speaking about Stryker as a stallion, starting with a Commercial aspect- the yearling market. His progeny have sold for as high as $220,000 and have reached an average of $43,000. Going on to be purchased directly by some of the country’s leading trainers. This data stacks up well considering he stands at a very reasonable 2021 service fee of $5,500 inc GST. For the breed to race enthusiasts we encourage you to view the statistics of how versatile Stryker’s progeny have been. having produced everything from Gr1 New Zealand Derby winner (2400m) in Rangipo to a Listed winning sprinter in Strykum (1050m – 1200m). Strykers other black type and leading progeny include; Laden, Persian Princess, Luen on Eagle, She is Stryking, Miss Loren, Galvarino and Miss Nymeria. Appealingly his progeny earning in excess of $11m to date, which is exceptional considering his limited covers over recent years. As well as having current winning progeny on the ground.

On a breed to race or owner/trainer look- Stryker’s exceptional nature and ability to replicate his talent and ability, and on occasion produce better than himself, makes him an appealing prospect for trainers to consider for their mares. Looking at residual value in his fillies as broodmare, it should be noted that his successful fillies have onsold as broodmares in excess of $160,000 to some of Australia’s most prolific studs. Stryker himself was highly competitive on the track, He competed in the early 2YO Group contests with a 3rd in the Gr2 Pago Pago Stakes and 4th in the Gr2 Todman. And going on to top company as a 3YO with a win at Gr3 level in the BTC Classic and 3rd in the Gr1 Galaxy.

He was a precocious type and breeds on precocious types. His pedigree is that of the Australian elite. By Champion Sire and Sire of Sires Fastnet Rock and with the all important dam line descending from one of the most sought after dam lines in the world- particularly in Australia being that of Joy And Fun Stryker’s dam Laetitia has also produced stakes place getters Exceed and Exalt, Puerto Bonus and the athletic Seeking Attention. Making her produce record exceptional, something that we believe Stryker was able to inherit from his dam, the all important ability to produce better than themselves. Such a rare quality in such a well bred athlete. This exceptional pedigree, makes Stryker an appealing match on paper with most mares, along with his ability to produce a versatile runner. 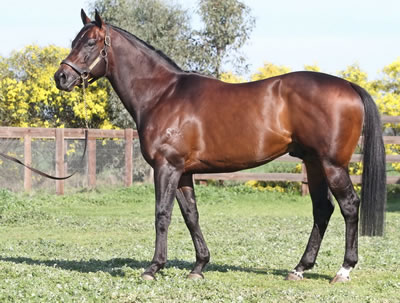