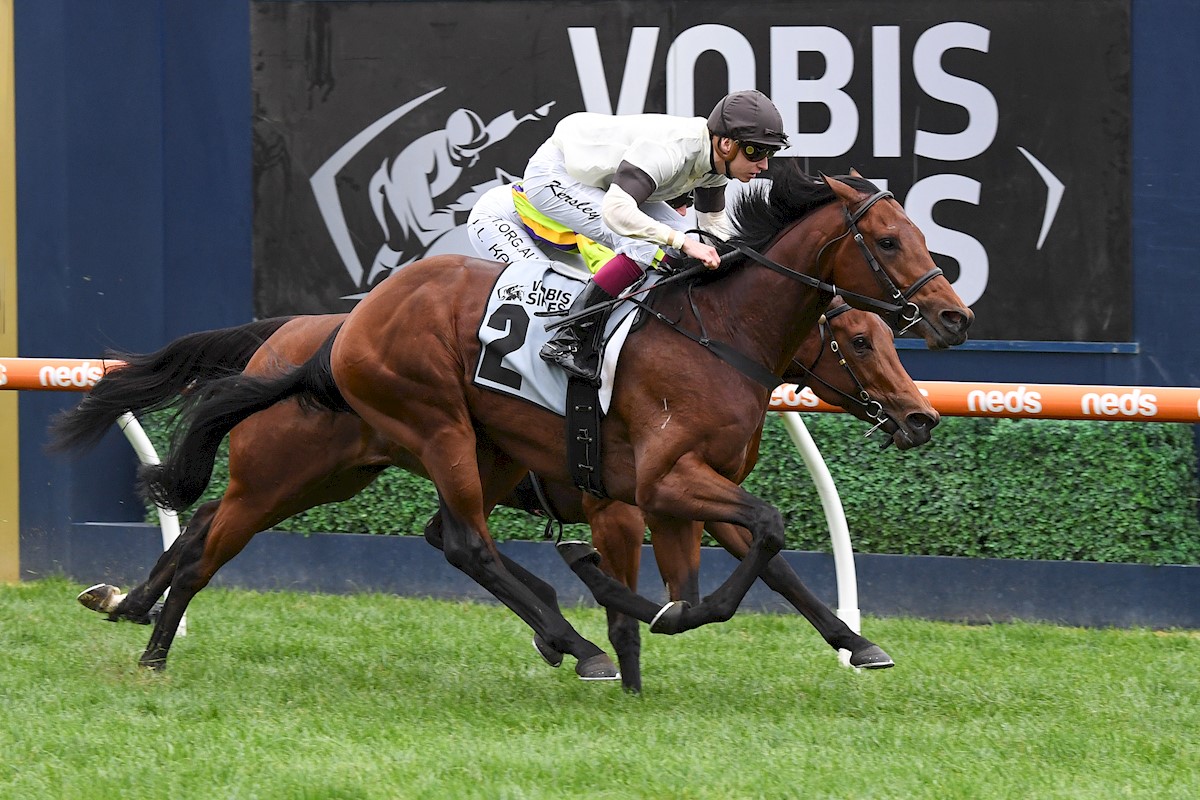 A chance encounter about five years ago, was the beginning of the story of Khoekhoe (pronounced qwey-qwey) winning the coveted Showdown crown on Saturday.

Susan Keating of Liverpool Farm and Daniel Nevill of Hollylodge Thoroughbreds could never have imagined that their encounter would lead to the win on Saturday.

Susan is the owner of Liverpool Farm in Strathbogie, where she has a broodmare band of about 10 mares. Daniel is the owner of Hollylodge Thoroughbreds in Avenel. In 2016, Susan had a colt by Casino Prince out of Thundarosa, who was being sold through the Hollylodge Thoroughbreds draft. The colt was knocked down for $40,000 to Lindsay Park Racing and the rest as they say is history.

Ever since then, Daniel and Susan have had a strong working relationship. Daniel will foal down her mares, wean them and prep them for her prior to sales.

Not only is Susan a staunch Victorian breeder but she also holds down a full-time position in the army.

Getting up in the early hours of the morning, she feeds and tends to her horses before she goes off to work. But for Susan who adores the industry and her horses, admits that she can get a little ‘too attached to her mares’, even though she knows she shouldn’t.

Susan has had previous success with the Blue Gum Farm sire Turrfontein and bred stakes winning mare, Lyuba. Lyuba won the Group 3 VRC Skip Sprint and is out of dam Dancing with Amy.

When asked about Khoekhoe, Susan says that he was a lovely foal and was nicknamed ‘Jimmy’. Susan said that she is a big fan of Turffontein and it was a ‘no brainer’ to send the dam Walvis Bay to him.

While Susan doesn’t want to have to part ways with her beloved horses, she is realistic that you can’t keep them all and this ended up with Khoekhoe headed to the 2019 Inglis Premier sale as part of Hollylodge’s draft, where he was knocked down for $50,000 to Matt Cumani.

Cumani was impressed with Khoekhoe from the moment he laid eyes on the colt but is quick to credit Tom Reilly (Aushorse CEO) with ‘finding’ him.

“He (Khoekhoe) wasn’t actually on my list, but I’ve been great mates with Tom for a long time and he suggested I take a look at the ‘Turffontein colt’” Cumani reveals. “Khoekhoe has a fantastic walk on him and is beautifully athletic. That’s the most important thing I look for at the sales.  If they look athletic and walk like an athlete, then surely there’s more of a chance they will be athletic.”

At Caulfield Racecourse on Saturday, the second ever edition of The Showdown was decided in the final strides of the race, with Khoekhoe securing his portion of $913,500 prize for his connections.

From barrier seven, Khoekhoe jumped straight on the bit and settled into the race midfield. Travelling comfortably the entire journey, his jockey apprentice Fred Kersley, sat patiently waiting for a gap to appear. With 100 metres to go, it looked as if race leader River Night (Night of Thunder (IRE)) would take the honours, but Fred and Khoekhoe stormed home to claim victory by a head, with Galactic Fury (Street Boss (USA)) three and a half lengths behind in third.

“You dream of a horse like this!” said Matt Cumani after the race.

“We were a little worried after Echuca,” he continued. “But to see him do that today was just unbelievable. I can’t thank everyone enough – the team, the group of owners we’ve got in this horse and Fred as well. He’s a fantastic rider and really pulled it together today. What a horse, he’s a very exciting type!”

Matt had two runners in the race exclusive for the two-year-old progeny of VOBIS Sires’ nominated stallions – stablemate Coup De Tonnerre finished ninth – and at times, the trainer didn’t know where to look.

“I thought Fred was just brilliant on him,” said Matt. “He never really panicked and was just waiting for the gap and when it came, it opened perfectly for him and the horse did the rest. A fantastic result!”

While Matt Cumani was delighted at Caulfield, Daniel and his partner Dr Katie Wilcox were over the moon with the result.

Daniel said that to see Khoekhoe win on the second running of the Showdown on Saturday, was a moment that keeps you going.

“I didn’t think that we would see Khoekhoe win the Showdown. He was a lovely horse, but I just thought of him as a three-year-old 1400 metre type of horse.” Daniel said with a smile.

“I only breed to Victorian stallions and having a race series (VOBIS Sires) like this that only Victorian stallions can race in, showcases Victorian quality. How great is it to see a horse sired by Turffontein take out The Showdown, we need to support our local industry and our local farms,” Daniel remarked.

“Hollylodge is about breeding a sound race horse to make the track, it is how I have structured my business.”

Khoekhoe is the seventh winner from as many foals out of mare Walvis Bay (Cape Cross). Named after a port town on the western coast of Namibia, the mare was a $19,000 purchase at the 2009 Inglis Australian Easter Broodmare Sale.

Saturday’s result makes it the second win from the colt’s three starts, with Fred partnering the horse at all three occasions. After finishing ninth on debut at Ballarat on 23rd February, he won at Echuca earlier this month before becoming the second-ever winner of The Showdown. The future for Khoekhoe – whose name is one of the languages spoken in the South African country from which his dam draws her name – looks bright!