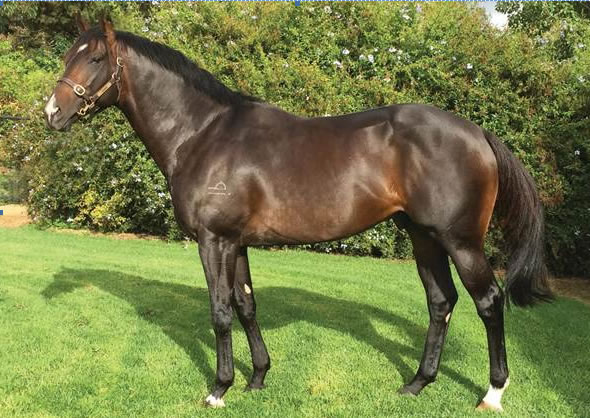 The Victorian stallion roster is sure to have a ‘hidden gem’ among its ranks and there is a good chance it is Larneuk’s Cluster, a son of Fastnet Rock.

The rise of champion sire Fastnet Rock as a sire of sires was clearly illustrated by the end of season sire tables with the title of Champion First and Second Season Sires both won by his brilliant sons Smart Missile and Hinchinbrook.

With seven Australian winners, plus a New Zealand stakes-winner Sassy ‘n’ Smart, Smart Missile has acquitted himself well this season as has Fastnet Rock’s other high profile young son Foxwedge, who has left 17 winners in both hemispheres including NZ stakes-winner Volpe Veloce.

The Champion First Season Sire in 2015, Hinchinbrook has powered ahead this year siring the winners of over $4 million in prizemoney, while Queensland based Rothesay and Victorian based Stryker made for three sons of Fastnet Rock in the Top 10 Second Season sires.

Make no mistake, sons of Fastnet Rock are on the rise and Neville Murdoch of Larneuk Stud in Victoria has decided to get on board with a well credentialled candidate in Cluster, who was well received for the first time last spring covering 68 mares.

Described by Murdoch as “an absolutely gorgeous horse,” Cluster is an eye-catching bay with Group I ability.

“He is just a magnificent type with great scope, strength and presence. He is an extremely athletic horse with a great deal of quality,” Murdoch said.

Given his obvious appeal it’s no wonder Murdoch elected to pay the additional fee to have Cluster included in the lucrative new $1.5 million VOBIS Sires program.

VOBIS Sires is an enhancement to Victoria’s respected owner and breeder incentive scheme, VOBIS, and aims to encourage support of Victorian-based stallions and provide those that do invest in their progeny with the opportunity for lucrative returns.

The progeny (starting from those born this year) of Victorian stallions nominated to VOBIS Sires will be eligible to compete in two exclusive races on the annual Victorian Owners and Breeders Raceday, currently held in April at Caulfield:

Unfortunately for Cluster, he had only two more starts finishing a close up fifth in the Group I MRC Sir Rupert Clarke Stakes before being injured in the Group I VRC Darley Classic.

Priced at $6,600, Cluster is one of those horses whose ability exceeded his race record and as such represents a great opportunity for budget conscious breeders with his female pedigree another obvious big plus.

Cluster’s first two dams are by champion Australian sires Last Tycoon (Ire) and Bletchingly, while his third dam I Like Diamonds won the Group 1 AJC Champagnes Stakes and is by Golden Slipper winning sire Baguette.

From a fast Australian family, bristling with stakes-winners, Cluster is true to his pedigree in type and performance.

“It is a great family chock-full of speed,” Murdoch enthused.

“Danehill, Last Tycoon and Bletchingly are all great influences and he is a horse who looks ideal for the VOBIS schemes.”